Legendary Washington & Jefferson College athlete Charles "Pruner" West '24 advanced the role of African-Americans in collegiate sports. He was the quarterback for the President's football team during its first and only appearance in the Rose Bowl in 1922. Also a track and field star, he earned the title of a two-time National Collegiate Pentathlon Champion and was named to the 1924 Olympic team, though he did not participate due to an injury. West went on to attend medical school at Howard University and led a successful career as a physician in the Washington, D.C. area.

West was a phenomenal athlete who normally played halfback for W&J but stepped in as quarterback for the Rose Bowl due to team injuries and illnesses. His athletic endeavors didn’t stop at the Rose Bowl and weren’t limited to football. He also was an accomplished track and field competitor who won the National Collegiate Pentathlon at the Penn Relays in 1922 and 1923, and who was named to the 1924 U.S. Olympic team, although he did not participate due to injury. He went on to sign with the Akron Pros professional football team after graduating from W&J in 1924, but instead chose to retire from athletics and attend Howard University Medical School in Washington, D.C. 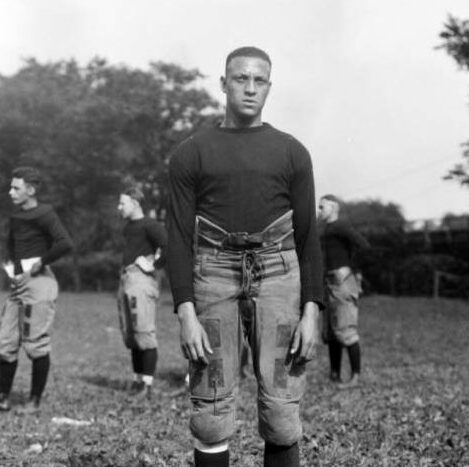 For the next 50 years, West maintained a general medical practice in Alexandria, Virginia and his community service outshined his work on the athletic field. Despite encountering numerous instances of racism in the pre-Civil Rights era in both his athletic and medical career, West was respected and highly regarded by his teammates and those who knew him on and off the field. The Alexandria Urban League awarded him for his community service in 1973, and in 1978 he received a Howard University Medical Alumni Association citation for his years of practice. West also received the W&J Distinguished Alumni Service Award in 1978, and passed away the following year, on Nov. 20, 1979.

West was one of four men that was inducted into the Rose Bowl Hall of Fame in 2018, joining former University of Texas head coach Mack Brown, UCLA quarterback Cade McNown and University of Michigan Heisman Trophy winner Charles Woodson. He joins teammate Russ Stein '21 in the Rose Bowl Hall of Fame. Stein, the Most Outstanding Player in the 1922 Rose Bowl, was part of the third class of inductees in 1991.

To learn more about West's legacy, read the full article in W&J Magazine, starting on page 8.