Residence Life coordinates a positive, safe, and developmental housing experience for W&J students. As we are a residential campus, 98% of W&J students live on campus during their four years. First-year students are paired with roommates and are housed in first-year housing based on the living preferences they submit. All continuing students participate in the spring housing process to secure housing for the upcoming year. RAs, upper-class trained para-professional staff, work with professional staff in residence life to provide support to students and to assist in building community. 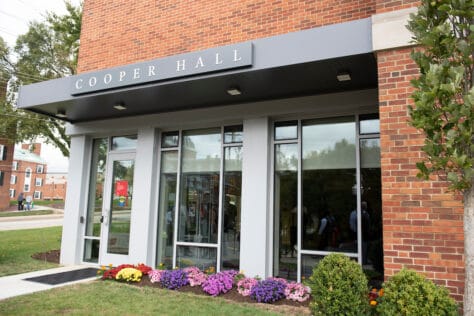 Cooper is a co-ed residence hall. The residents of Cooper enjoy a suite-style living, a community kitchen, and laundry facilities conveniently located in the building. A large common space on the ground floor provides an area for studying and socializing. The building's "U" shape creates a grassy courtyard outside where students can relax and enjoy nice weather.

The entrance and lobby of Cooper were renovated in the summer of 2019. 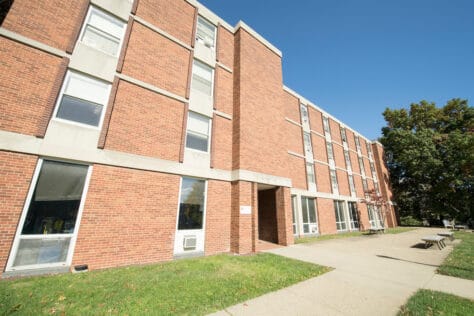 Alexander, like Cooper, is a co-ed residence hall. The residents of Alexander enjoy suite-style living, a community kitchen, several quiet study spaces, and an expansive courtyard in front of the building. In addition, it boasts a large ground floor common area that is frequently home to great programs and activities. Alexander is also conveniently located beside an outdoor basketball court where students often meet up for games in nice weather.

Alexander Hall is an exact twin of the neighboring upperclassmen residence hall, Marshall. Apart from a few changes that have been made over the years, the buildings remain nearly identical. Alexander Hall also houses the Peer Assisted Learning Center and the First Years Resource Lounge. 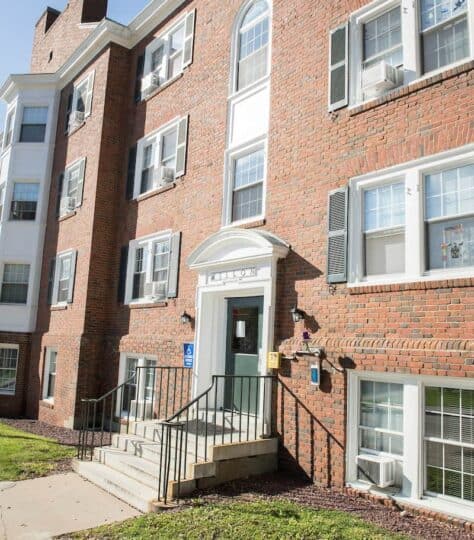 Mellon is an all-female residence hall. Mellon Hall traditionally boasts one of the closest communities on campus. A traditional hall, Mellon Hall consists primarily of double rooms. Residents on each floor share one of the four bathrooms which were recently renovated. The first and second floors have study rooms available to all residents and a large common room is located on the ground floor. A courtyard area shared with Upperclass and North Halls is often the site of Frisbee games. Mellon was built in 1949 in the memory of James Ross Mellon, a member of the Jefferson College Class of 1865, and was a gift of the W.L. and May T. Mellon Foundation.

Mellon Quick Fact:
Mellon is one of the oldest and most storied halls on campus. 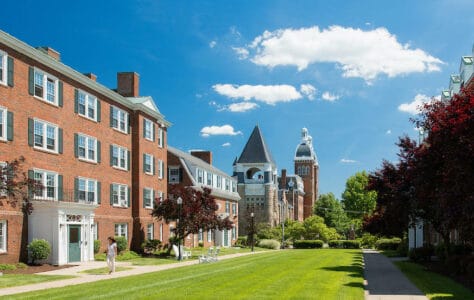 Upperclass is an all-male residence hall. It consists primarily of double rooms but also includes a limited number of triple and single rooms. Residents share common floor bathrooms that were recently updated as part of a large-scale building renovation. A courtyard area located on the building's west side and the building's ground floor common area are great places to spend time with new friends. Laundry facilities are nearby in neighboring North Hall.

Despite its name, Upperclass Hall has actually functioned as a freshman residence hall for a large part of its history. 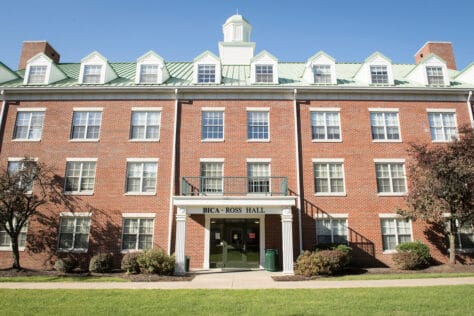 Bica-Ross Hall is home to 118 students. The building offers a suite-style living option for students primarily in their senior and junior years. Each suite in Bica-Ross contains four single bedrooms, a common living area, a common bathroom, and a storage closet. Additionally, each suite is equipped with a heating and air conditioning system. A study room can be found on each floor. Inside students may take advantage of a kitchenette with a sink, refrigerator, and microwave. A laundry facility can be found on the ground floor. The building leads out a courtyard and the Henry Memorial Gym is also located adjacent to the building.

The building was dedicated by Ms. Violet Bica-Ross in memory of her late husband L. Clayton Ross'30. Ms. Bica-Ross visits campus yearly followed by a reception that is held at Bica-Ross Hall. Construction on this building was completed in 2004.

Marshall Hall is home to 130 upperclass men and women who enjoy suite-style living with two rooms sharing a bathroom. Marshall has two study rooms on each floor and a large common area on the ground floor for relaxing and socializing where students can watch TV, play a game of pool, or cook a meal together in the community kitchen. The basketball and sand volleyball courts adjacent to the building allow for outdoor activity and laundry facilities are located next door in Cooper Hall.

The building is dedicated to the memory of The Hon. Elder W. Marshall member of the W&J Class of 1904 who served as President of the Board of Trustees from 1948-1959. Marshall Hall is also exact twin of Alexander Hall, which is located directly in front. 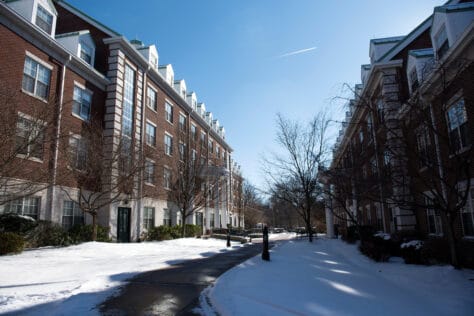 New Residence Hall is home to 108 upper-class students. New Residence Hall was built in 2002 with the construction of the fourth floor concluding in 2004. New Res offers a suite-style living option for students primarily in their junior and senior years. Each suite in New Res contains two bedrooms and a double room, a common living area, common bathroom, and storage closet. Additionally, each suite is equipped with a heating and air conditioning system. A study room can be found on each floor. Inside students may take advantage of a kitchenette with a sink, refrigerator, and microwave. A laundry facility can be found on the ground floor. 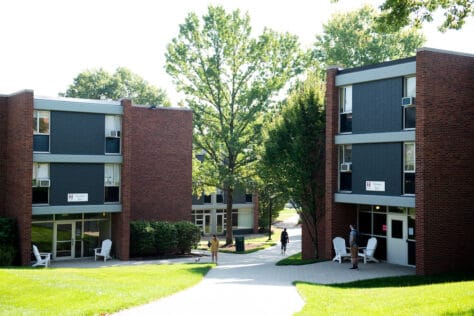 Presidents Row offers a variety of housing options for upper-class students. There are nine buildings within this community which include Buchanan Hall, Harrison Hall, Jefferson Hall, and Washington Hall. These buildings offer co-ed, living environments as well as the Green House (Adams Hall), International House (Cleveland Hall), Quiet House (Lincoln Hall), and the Pet House (Monroe Hall). Each building consists of a community of 32 students with either student living in a wing sharing a common bathroom. Each building also has two common lounges and a laundry facility.

Presidents Row was completed in 1968 and originally housed our fraternities and sororities until fall 2005 when they moved to Chestnut Street. Presidents Row residence halls began undergoing renovations in the summer of 2019.

Wade House is an upper-class female building and is home to 24 residents and one House Liaison. The house has single, double, and triple rooms and a restroom on each floor. The house is located up the hill from Burnett and Olin Halls in a historic section of East Washington Borough.

Wade House Quick Fact:
Wade House is a late 19th-century Victorian mansion that was completely renovated during the spring and fall of 2017. 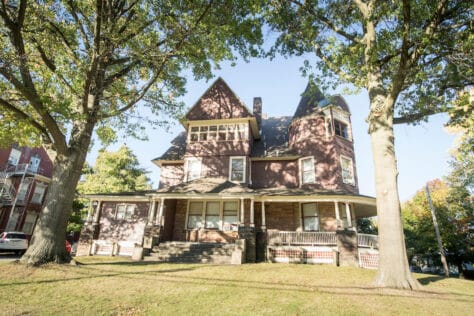 Whitworth House offers a unique living environment for upper-class female students in that it is divided into individual, self-contained apartments. Each apartment has its own bathroom, living room, and full kitchen. The house is located up the hill from Burnett and Olin Halls in a historic section of East Washington Borough.

Whitworth Quick Fact:
Whitworth House is a mid-19th century Victorian mansion that was acquired by Washington & Jefferson College in 1997. Formerly called Kimm House, it was renamed by the College in 2007.

How do students make connections with one another?

Residence Life student staff are tasked to help build peer-to-peer connections through events in the residence hall and helping to navigate interpersonal conflict.

What services are provided in the residence halls to support students in crisis?

Campus & Public Safety, student staff and professional residence life staff, a professional mental health counselor, facilities and  are on-call for students to help resolve a myriad of issues. We also work closely with services in Washington.

What happens if I/my student doesn't get along with my roomate?

Conflict happens, which is a part of new relationships and living in a shared space. The first step is for the students to speak to each other before approaching a student staff member for a mediation. Should a student feel unsafe, they can call Campus & Public Safety for assistance at 724-223-6032.

I have another question, who do I ask?

Am I allowed to stay in my residence hall for Winter Break?

The campus will close after the Fall semester which means there are no services for students, which means that the residence halls are closed. If you need assistance finding alternative arrangements please email reslife@washjeff.edu.

Am I able to decorate my space?

Who cleans my room?

Students clean their own rooms! However, custodian staff cleans the bathrooms!