The Charles West Scholars is a selective program that seeks to educate, engage, and empower black/African-American-identifying students at W&J. Named for W&J graduate Charles “Pruner” West ’24, the first African-American quarterback to play in the Rose Bowl, the program provides financial support to outstanding African American students residing in Pennsylvania.

The program supports students in developing their identity on campus, developing as a campus and local community leader, growing academically, and facing personal, social, cultural, and academic challenges while at W&J. 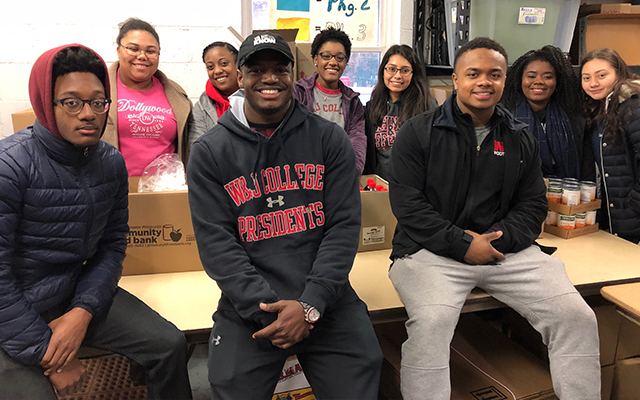 Charles West Scholars meet monthly to host discussions on topics of race, diversity, campus life, or other subjects as proposed by members. To contribute to the world in which we live—a tenet of the W&J mission statement—Charles West Scholars perform community service projects each semester. In February, the Scholars work in conjunction with the Black Student Union to host events for Black History Month.

Scholars also participate in social events, including anything from bowling trips to formal dinners, and they work closely with students in the YES Prep program in their community service and social endeavors.

Scholars are selected from the freshmen and transfer student application pools based on high academic performance in high school and/or at their previous college, and contributions made to their local community. Students who are invited to join the Charles West Scholars are awarded a scholarship that is renewable for up to four years.

Who Was Charles West?